That may seem heartless, but the Covid-19 pandemic is both a warning and an opportunity.

It is a warning that the world is interconnected in ways that we cannot unravel.

We cannot insulate ourselves from the global threats that are a consequence of the fact that we ourselves are a virus, too lazy and selfish to see that we are destroying our host, the planetary ecosystems on which we depend to survive.

Globalisation has arguably lifted millions out of poverty, but it has also produced unprecedented global fragilities as humanity has remorselessly encroached on and debased the natural world.

The Coronavirus outbreak is just one symptom of that encroachment – but the global climate crisis remains the most serious global threat. 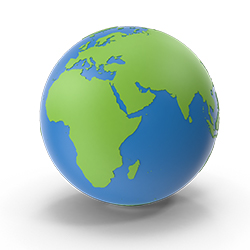 The situation is rapidly deteriorating and is likely to trigger secondary crises of increasing severity.

Someone on my timeline recently said his daughter asked him if, growing up, she would ever have the benefit of living in a time without crisis.

There’s a terrible truth in that question: as things stand we are bequeathing our children a world of continual and worsening environmental and social dislocation.

So, in the midst of one crisis, amaBhungane is focussing on another: #EarthCrimes.

It is our attempt to blow the whistle on the companies, policies, politicians and people who are helping to wreck the planet.

In our launch exposé, we show how the government’s plan for a giant Chinese-run, coalfuelled mineral processing zone at Makhado, near the Beitbridge border crossing, is fronted by a man branded a crook by co-directors in one of his companies.

A London high court judge threw out his civil challenge to such allegations because he lacked candour.

That is just the start of the deep flaws of this absurdly ambitious project that purports to give the Ramaphosa administration a foreign investment coup to crow about.

One might think the Covid-19 crisis would put paid to such dirty industrial fantasies that really belong in the last century.

To stimulate its domestic economy following the Covid-19 pandemic, China has surged its new coal plant permitting. In March, China permitted more coal-fired capacity for construction than it did in all of 2019.

This despite the fact that China has a huge energy surplus.

Similar pressures were on display on 27 March, the day our lockdown began, when our own minister of environment gazetted sulphur dioxide air pollution standards only half as stringent as the previous standards!

So, while the global industrial shutdown enforced by the pandemic has temporarily produced clearer skies and cleaner water, it may not necessarily produce the kind of deep economic and industrial reboot that the planet needs. That requires a global shift in thinking.

There is every indication that the pandemic will force us to confront the kind of changes needed to keep the planet from warming above the dangerous levels it has reached already.

Firstly, it has put paid to growth.

Realistically assessed, we are headed for a great depression that might outstrip the economic implosion of the 1930s.

For the planet, that might be just what the doctor ordered.

All the evidence on climate change suggests we can have a liveable planet or we can pursue unchecked growth, but we can’t have both.

Up to now, that has been an unpalatable political choice.

As Simon Kuper wrote in the Financial Times in October 2019: “A long economic depression might be enough to keep the planet habitable… [But] we are not going to find out. No electorate will vote to decimate its own lifestyle. We can’t blame bad politicians or corporates. It’s us: we will always choose growth over climate.”

Now the virus is likely to enforce that outcome – at least for a time – without our having to make the initial hard political choices.

It is said that greenhouse gas emissions could easily drop by 5% or more this year as a result of the pandemic.

The second potential impact is to force us to restructure our societies to deal with the fallout of economic collapse.

What the pandemic has shown is that it is the social floor that counts, not the ceiling.

Without a proper social contract, without a broad socio-economic safety net – healthcare, shelter, education, information – societies are not able to contain and manage a crisis like this pandemic.

Covid-19 has the potential to force politicians and economists to address the current skewed balance between the individual freedom to accumulate and consume, versus the collective responsibility to protect, conserve and share.

If it does that, it will make a major contribution to meeting global climate goals.

But those positive outcomes are by no means assured.

It is not coincidental that the Great Depression was followed by a period of fascism and war.

The ability of political parties and governments to act as instruments of social cohesion and redistribution, rather than merely in the interests of elites, has been undermined by the influence of money in politics and a rise in disaffection, nihilism and populism.

Social consensus seeking has been made more difficult by the crumbling of the global news ecosystem – just as ubiquitous social media has atomised audiences and created systems that enable propaganda, emotivism and self-reinforcing silos.

At the heart of our crisis, is a failure to have a politics that accounts to citizens, instead of to elites, factions and self-interest.

amaBhungane was formed to expose and attack that failure.

Dear Editor
Noseweek’s deliveries in the time of Corona ♦ Tannenbaum liquidators’ high fees and low performance ...
Dear Reader:
Cyril’s scary China deal: are we that desperate? When Jacob Zuma fell from power, the Guptas ...
Earth Crimes
Never let a crisis go to waste. That may seem heartless, but the Covid-19 pandemic ...
Limpopo's dirty great white elephant
amaBhungane’s EarthCrimes series: Government’s plan to develop a R40-billion Chinese-controlled energy and metallurgical industrial ...
UPDATE:Spar vs Spar
The postponement of the Spar vs Spar court case in the High Court in ...
The money train
Transnet, liquidators of Gupta-linked Nkonki fight over R57m in ‘corrupt’ payments and invoices Transnet is ...
Bringing hope to the people
‘We will overcome this and we’ll realise we are a communion of nations more ...
He's no pharmaceutical genius, he's a vulture
Last month, in an 11-page letter posted on an American pharmaceutical company’s website,  Martin ...
Larry Klayman - conspiracy litigant
For readers who love a conspiracy, meet... Larry Klayman – Conspiracy Litigant He has been called a ...
Bush school - A memoir
Our school was in the middle of the bush, ten miles from the nearest ...
A childhood made up - Living with my mother's madness
Brent Meersman is a journalist and chairman of the Cape Town Press Club. Who would ...
Okay, Okay, Okay - Finuala Dowling
It’s been said before that Finuala Dowling has something of Jane Austen about her ...
American Dirt - Jeanine Cummins
Lydia owns a bookshop; her husband Sebastian is a journalist who is not scared ...
Never take a hypochondriac to a pandemic
From Ronald Wohlman’s New York Corona Diary Day 30. A Lazy Easter Sunday afternoon Happy Easter to ...
Everybody drinks Corona
I am hesitant to go into the pub today. Not because it’s illegal, but ...
Classified ads #247 May 2020
HOLIDAY ACCOMMODATION ♦  LOCAL PROPERTY FOR SALE ♦  WANTED ♦  FOR SALE ♦   LEGAL, INSURANCE ...
BIGGEST ROBBERY OF THE WEEK
Reader Roger King has brought the following intriguing information to Noseweek's attention: All lotteries were closed ...